A baseline population study conducted in 2009 revealed that some 90 to 120 adult western pond turtles depend on habitat provided by MVSD’s Moorhen Marsh. This 21-acre freshwater wetland was constructed in the 1970s to provide valuable aquatic habitat for native fish and wildlife. The marsh receives 1.2 million gallons daily of advanced secondarily treated effluent as its primary water source.

In 2011, MVSD recognized that to provide the best wildlife habitat possible, a new Management Plan was required for Moorhen Marsh. The plan was completed in 2013 and identified the need for pond dredging and levee stabilization. To determine how and if the pond turtle population would be affected, a telemetry study was done.

With grant funding from the Contra Costa Fish and Wildlife Committee, MVSD purchased five very high frequency (VHF) radio telemetry units to monitor the turtles' activity. However, this method did not prove as successful as hoped, as the VHF units used to tag turtles proved unreliable. Though significantly more expensive, GPS is a more effective and efficient form of tracking compared with the VHF units, as long as the turtle is big enoughto carry the added weight of the larger GPS unit.

Thanks to the ongoing study, MVSD now knows that turtles are in fact, nesting in the limited upland habitat of the marsh. Because female turtles do not incubate or tend to the nest after the eggs are laid, predation of nests is very common. Unfortunately, many of the nests in Moorhen Marsh are predated. To protect nests from predators, they are covered with special cages designed to allow hatchlings to get out once they emerge. The nests are incubated by the sun, and viable eggs hatch in 80-100 days.

Many species of wildlife are studied using radio telemetry. This technique includes the use of a tag that can be glued to an animal (turtles), applied with a collar (bears and other large mammals), attached with a vest (California Condor), or placed internally (fish).

Radio telemetry units come in two different types: VHF and UHF. A VHF unit is usually smaller than a UHF unit and the emitted signal is captured through the use of an antenna and receiver. This is the type of telemetry unit we used to study turtles in 2012.

UHF uses GPS technology. GPS allows biologists to pre-program a unit to collect location data as frequently as is needed for a given species. For pond turtles, every hour during the day can provide location points.

With this method, biologists download the data from the unit remotely–using an antenna, or by collecting the unit from the turtle and plugging it directly into a laptop. UHF telemetry units are a more expensive technology than VHF, but provide much more data with far fewer hours in the field. These units are often much larger and heavier than VHF units because of the increased battery size.

We applied GPS units to five pond turtles in 2013 and four pond turtles in 2014. One of the goals for the MVSD study is to assess the advantages and disadvantages of both technologies as we gain a better understanding of how turtles use the different habitats of Moorhen Marsh throughout the year. 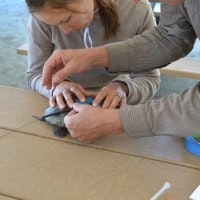 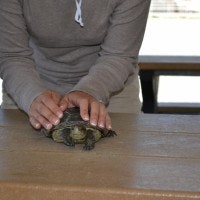 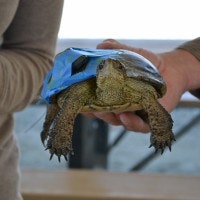 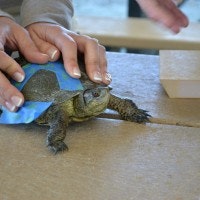 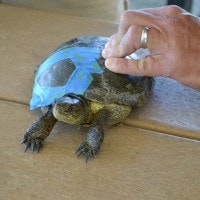 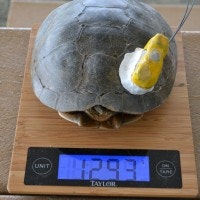 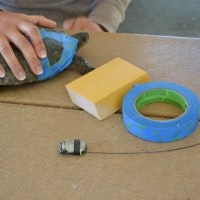 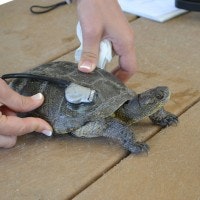